Featured in two categories of the 2018 Stock Check Magazine from Speciality Food Magazine. 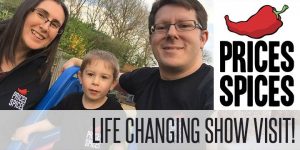 A visit to The Edible Garden Show in 2013 proved so inspirational for Michael Price that he’s ditched the rat race to create an award-winning business producing artisan preserves, sauces and chutneys.

This year, the 38-year-old father-of-one will be back at the UK’s only show dedicated to grow your own selling his own homegrown produce when it returns to Stoneleigh Park, Warwickshire alongside Good Life Live from 11-13 March.

“We’re really looking forward to it as The Edible Garden Show is where it all really started,” says Michael who with the support of his wife Heather – a merchandiser for Sainsbury’s – has set up Prices Spices from their home in Leamington Spa.

“I was already growing chillies in my greenhouse but it wasn’t until I brought some of the Dorset Naga variety from Joy Michaud’s Sea Spring Seeds stand at The Edible Garden Show that things got serious. They were running a growing competition and I won! I had to buy a new freezer as I had 2kg of chillies and was left thinking what can I do with them?”

He spent their family holiday in Greece with their now 4-year-old son Zachary coming up with a plan to start producing chutney and selling it at various chilli festivals.

Prices Spices quickly received some great feedback and in just a few short months even the food critics were taking note as August 2014 saw its pineapple and Dorset Naga chilli chutney ‘India Joywala’ secure a Great Taste Gold Award from the Guild of Fine Food.

“Our customers seem to like that everything we produce contains some level of spice from our home grown chillies. For the produce we don’t grow, we use local suppliers and try to source items locally to keep food miles to a minimum,” adds Michael who has since taken voluntary redundancy from his role as an IT developer and data analyst at Aston Martin to dedicate more time to the business.

“It’s certainly going in the right direction and is quickly taking over the house! We’re going to have to start looking at getting a unit soon as we start approaching and encouraging more wholesalers nationwide to start stocking our range, which has been extended to also include chilli jam’s and sauces as well as curry pastes, pickles and spice mixes.”

Leaving the rat race and a daily commute to Gaydon has also benefitted the family in other ways. “It has given us more family time as I now have the opportunity to take and pick up my son from school. He also likes getting involved and likes helping plant the seeds and picking the chillies off of the plants, which spurred me to write a 10-page book for his old nursery to teach the rest of the children how to grow chillies.”

Prices Spices can be found at The Edible Garden Show on stand 218 and Sea Spring Seeds will be on stand 600. “It’s a really inspiring show and I’m so glad it is returning to Stoneleigh Park after being in London for the last two years. I’ve set up a business on the back of The Edible Garden Show and love it. You get some great ideas on how to grow things differently. I got some wonderful advice on growing hydroponically using mineral nutrient solutions, in water, without soil, for example.”

The Edible Garden Show Event Director Geraldine Reeve says: “We’re so delighted to be welcoming Michael and Prices Spices to the 2016 show as an exhibitor. We know people walk away feeling inspired but to hear The Edible Garden Show has played a significant part in realising a long-term business dream is amazing! We are looking forward to enthusing many more people this year with our huge crop of exciting exhibitors as well as our fertile mix of interactive advice sessions, hands-on demonstrations and livestock.”

Make sure to buy your tickets to the show, and who knows maybe it will prove life changing for you too! 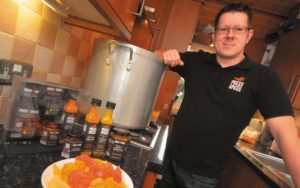 So says self-confessed spice-loving entrepreneur Michael Price who has turned his passion for chillies into a career.

In 2013 the Lillington resident found he had an abundance of chillies growing at home so decided to share his love of heat with others by making jams, sauces and chutneys to sell.

They went down so well that he decided to follow the spice route full time last November when he took voluntary redundancy from his job as a data analyst with Aston Martin.

The 38 year-old also grows garlic, onions, cauliflower and courgette which he also uses to make his sauces, jams, chutneys, pastes and pickles from his kitchen known as Prices Spices – with 90 per cent of his ingredients homegrown and the rest are locally sourced. 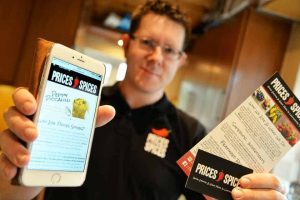 In his youth, Michael had wanted to be a chef and his passion for cooking has stayed with him. His website offers recipe suggestions for each product and he is keen to hear from customers with suggestions of their own.

The dad of one hopes his products will have broad appeal – to those who don’t know what the Scoville Scale is – the measure of how spicy chillies are – to seasoned chilli fans.

Michael told the Observer: “I love talking people through my products and encourage everyone to push themselves when they try them. You would be surprised how many people say they aren’t into heat but end up loving and buying the hotter products!”

His ‘India Joywala Chutney’ is a firm favourite at the chilli festivals, and in 2014 it won a gold Great Taste Award. Organised by the Guild of Fine Food, they set the benchmark for fine food and drink.

Piccalilli was one of the first condiments to undergo a revamp in Michael’s culinary journey by packing his version full of home grown vegetables.

He said: “When I was younger piccalilli was more mustard than it was vegetables. There were always arguments over who ate the last piece of cauliflower – not that there was much in there to begin with. I took something many people don’t have fond memories of and I’d like to think I’ve made it likable!”

Being a one man band is no picnic for Michael, who does everything from sterilizing and labeling jars to sending out orders across the country – but he does get a helping hand occasionally from wife Heather and four-year-old son Zachary who join him selling at markets and picking chillies.

Prices Spices are stocked in shops across the country, including Hilltop Farm near Hunningham and Warwick Street Kitchen in Leamington. 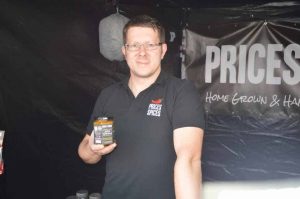 There were a lot of vendors selling chutneys to chilli sauce (well it was a chilli festival after all). We were struck by the amazing quality of two of these vendors. The reason for the reviews is that although a good chilli or chutney sauce contains the heat you would expect, both Pip’s and Prices Spices had the ethos of flavour over heat.

The first was Prices Spices – an amazing array of different sauces and pastes that we each took part in separate taste sessions. Michael Price would talk us through each one and explain on point the subtle differences in each second of the tasting experience. We were very impressed by Michael’s knowledge of how to get different combinations to work together. We were so impressed that we brought a jar of the recommended and award winning India Joywala chutney, since then we have burst opened the popadoms and devoured a half of the jar in one sitting. A great companion to any sub continent dish. Prices Spices are based in Leamington Spa. Click here to read more about Michael and his range of outstanding sauces.